how to write a history of realism

In the 21st century frame, realism is a question of data – the composition of the stuff of the world in the form of facts - and modes of data capture, the ordering of captured data in a taxonomy for storage and retrieval; and the processing that today occupies the position once held by interpretation. The mathematical model tempts its acolytes to understand all previous discourses and practices as instances of the informatic model. The pursuit of realism as an aesthetic however requires us to consider the unique characteristics of the present moment – what criteria it has for recognising something as real – and therefore to understand that other ages and cultures had and have other criteria and therefore other realisms that cannot be reduced to the dominant model.

Henri-Jean Martin (1994: 1) notes in opening his book on the history of writing that 'anyone imprudent enough to risk studying the chronology of writing alternates ceaselessly between vertigo and myopia'. That oscillation between extreme detail and bewildering scale applies to the historian of realism. You could hazard that 2019 realism is to data as 1719 realism (the date of Robinson Crusoe's publication) was to romance and the fantastic, and there would be an order of truth involved; but how then would you position the 1937 debates on realism between Brecht, Lukacs and others in the pages of Das Wort? The prospect of realism is so vast and its conduct so detailed. Something like 3000 years separates is from the Iliad, yet even now parts of it – the tactical training, the management of ships and horses – are strikingly realistic; and pictorial realism should encounter far older techniques, and more mysterious relations with the world. Media archaeologists properly argue for myopia, but the vertiginous is alluring, if only as a way of understanding – one hopes, 'exactly' – how the mathematical theory has become so dominant that we no longer notice how deeply the harness has worn in. 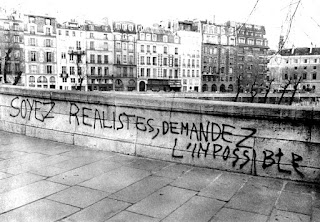 What was realism in 1968, when Situationists adopted the slogan 'Soyez réalistes, demandez l'impossible' ('be realists, demand the impossible'), four years after Lacan's famous seminar on the four fundamental concepts where he proposed 'le réel, c'est l'impossible', the Real is the impossible? The impossible is Real, in Lacan's terms, because possibility can only be defined in the Symbolic, the arena of language, numbers and logic. The Real is impossible because it cannot be counted, recounted or accounted for. The situationists embraced the obverse of order, or what lies beyond it, and refused the already ascendant use of probability in political and financial risk management. Financialisation rests on this probabilistic Symbolic order, a system of derivatives unanchored from any solid ground. To be realiist after Lacan is to demand an unaccountable world. Lacan's relations with the surrealists Bataille and Breton from 1929 or 1930, and the reverberations of surrealism through eastern Europe in the Soviet era, suggest that the threshold between possible and impossible is the core concern of documentary and fictional realism and surrealism at least into the 1970s. For the mathematical model, the threshold lies in the probabilistic definition of noise, the opposite of communication. In Lacanian surrealism, and to a degree among the situationists, we instead encounter the possibility that there is an excess of meanings: that the world (and we humans to the extent that we are at once inside and external to the world) mediates way more than communication can handle.

'Wovon man nicht sprechen kann, darüber muss man schweigen', 'Whereof one cannot speak, thereof one must be silent', the seventh and concluding proposition of Wittgenstein's Tractatus, says that we cannot speak of or otherwise enumerate or state the Real, but that the moment of silence indicates the limits of what is sayable. Nonetheless there are statements about the Real – I defer to Hawking's Brief History – but they describe what cannot be experienced, black holes for example, and to the extent that they do describe, indicate, mathematically and algebraically, the limits of symbols and the symbolic order. The threshold does not define the nature of being, the Real: they define the limits of any symbolic order, the terrain, precisely, of the univeralist ambition of Shannon's theory. Noise is not defined by its difference from communication: rather vice versa, communication is definable as what excludes itself from the Real.

The precarity of a symbolic order self-exiled from reality is nowhere more apparent than in Appadurai's account of financialisation as a tower of self-referential promises which bind speakers to one another by contract while freeing themselves from the goods that they once would have traded but now increasingly distance themselves from. The realism of the global financial crisis of 2007-8 concerns those spurned houses underlying the mortgaged mortgages. The crash's realism was the revenge of the repressed real. #MeToo and #BlackLivesMatter assert the real costs of symbolic orders. Those costs, however excluded from discourse, ideology and symbolic formations, participate in them as their defining boundaries. Within the closed system of finance, however, the hitherto final operation of humans, to provide meaning as the conclusion of interpretation, is no longer needed, and meaning too becomes Real, precisely because it is excluded from the symbolic. Subsumed under capital first as attention value (Dallas Smythe), human responses are no longer the final stage of communication but sources of second-order data. The formal subsumption of attention into the commodification of audiences in the Golden Age of Television becomes real subsumption with the capture of likes, swipes and clicks in interactive network media. Meaning becomes first physical behaviour but then, instantaneously and automatically, it is abstracted for symbolic storage and processing. Interpretation of the amassed data is no longer a human task.

Processing thus achieves a higher level of abstraction, construing and constructing its own world but, as in the GFC, its autonomous world is not truly self-sufficient, coherent or complete. Realism activates the threshold of incompletion. This is not a matter of lack but of loss: a historical, time-bound incompleteness. Lack, negation, noise as only the obverse of communication, would be ontological; loss is historical, a diminution, a missing part that runs a system down or stops it, frozen, in its tracks. Loss is historical because it belongs to the friction between 'autonomous' symbolic systems and the ontology they strive to expropriate and escape. This is the terrain of the failed freedom of art. And the object of loss, the lost object, the missing part, where is it? It cannot be said to have no existence. It is only lost. If the symbolic defines the now and the here, what's lost continues to exist, but elsewhere.

Posted by Sean Cubitt at 4:02 PM No comments: