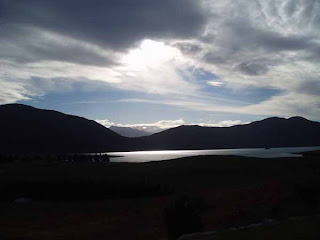 Zero, Frege argued, is the logical opposite of what exists and is present; zero is the non-identical. Black is of the same quality. In its sheerest state, the absence of all radiant or reflected light, it is pure non-existence. Like zero, it has no logical existence: it too is non-identical. In this way, we arrive at the critical definition of black as potential, black as virtual, black as that which does not exist but which, as the negation of light, has the capacity to be realised, even if that capability is never brought to fruition. In this extreme moment of light, which we can only ever approach but not reach, all the paradox of light emerges, and better still, not simply paradox but contradiction.
Posted by Sean Cubitt at 4:29 PM No comments:

The Difficulty of Saying Things

The core problem is how to make a statement that is neither excessively particular and antiquarian nor excessively abstract and theoreticist. A first step in confronting this difficulty is to rid ourselves of Heideggerian essentialism: to speak not of what seeks to reveal itself but of how the action of revealing is truly an action, one that moves outside the normative processes which under capitalism standardise any successful technological innovation, usually at the lowest aceptable (to the consumer) and most profitable (to the manufacturer) specification. An action worthy of the name is a transformation in which both the material and the technique in which it meets the actor, and the actor too are all transformed. No essence then but a dialogue, a dialectic, a breaking asunder mutually of what is most and least essential: human polis, techné and physis. There is an actual history of normativity, and a virtual history of creativity.

Dimly as yet there emerges a critique of terminal philosophies – those based on the terms of relationship rather than on relationship itself; against for example Schopenhauer's "The World is my idea" as much as the positivism of engineers. Against the devastation which destroys any future – by an Act of God like a tsunami, or by corporate plan – creativity proposes events worthy the name, which virtualise (rather than actualise or normalise). The specific is the medium of history even when it is the ejecta of History, even and perhaps especialy when lionised in the work of a Master (Rembrandt, Cézanne). The specific should be the common lot: that it is not is a fundamental question for the history and philosophy of media. How has mediation been terminated.
Posted by Sean Cubitt at 4:22 PM 2 comments: