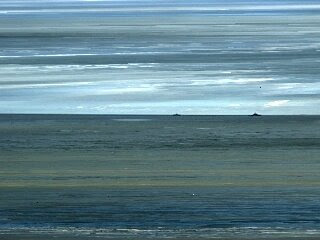 the fourth early 2009 entry is from a catalogue essay for Susan Collins' new work Seascape. The work as installed has five feeds from cameras timed to accumulate one pixel every quarter of a second or so, filling the screen in roughly the time for a full tide cycle

There is a curious design feature of CCD chips. To make the orientation and structure of the crystal lattice identical to that of the underlying chip, the crystals are grown on the chip itself. This is the reason why their production is called ‘fabrication’ rather than ‘manufacture’: the scales are far, far smaller than human hands or tools. It is a game with the very fabric of the world. There is a kind of automation here, one premised on fundamental laws of nature, rather like the process of photography itself, analog or digital, which relies on the properties of light and light-sensitive materials. In a certain sense, admiring the steady build of the pixels in Seascape, you have the sense of the image being grown, as the crystal lattice was, and that the image has the orientation and structure of the world in front of it, even though the process is such that it never resembles a snapshot.

For those two or three seconds that are required to make a little row of eight or nine pixels that stand out because of their pallor or their darkness, there was perhaps a brief spell of sunlight or thick cloud or rain. The oddity is that the assembled image should have such a large-scale resemblance to a familiar snapshot of any moment of waves rippling. The sea, like many crystals, has a certain long-range order to it, a self-similarity over time, a kind of symmetry across the tidal cycle. It is that self-similarity, that symmetry, that is captured in these images. A strange mathematical gathering of the sea, a restless formulation, unsettled settling into order of the orderless; a sedimentation, a crystallisation.
Posted by Sean Cubitt at 4:50 PM No comments:

The third is from a 'vision statement' prepared for Third Text's 100th issue due later this year.

The third problem with ICT4D concerns its articulation with sustainability. In theory, digital communications substitute for energy-hungry transportation, encourage people to stay home in villages rather than risk the desperate conditions of the slums, and prepare economies for transition to the supposedly weightless condition of the advanced information economies. The sad truth is that digital technologies are more, not less, polluting and energy-hungry than predecessor media like film and print. The environmental footprint of digital media comes in several phases: (1) The extraction of raw materials, including rare earths and gemstones often mined under appalling conditions, and subject to strategic struggles to secure supplies among the major powers (for the case of sapphires, important for LED fabrication, see Rosaleen Duffy's article) (2) the manufacturing of computers and computer parts on offshore, unregulated and immiserated areas such as the maquiladoras of the Mexican-US border region (see Coco Fusco's The Bodies that Were Not Ours); (3) the built-in obsolescence of the computer industry, based on constant cycles of updates and system changes (4) the energy requirements of manufacture and of use (see for example the Koomey report on server energy usage) and (5) the recycling and dumping of unwanted computers, many of which pass through donation programs to the developing world before finding their inevitable way to the nightmare of recycling villages, notably in West Africa and Southern China (see the Exporting Harm and Digital Dump reports from the Basel Action Network). Attempts to build systems which do not have these impacts are the next challenge: they need to learn from the failures of earlier Western-inspired and impracticable projects like the Kinkajou projector and, though its ultimate fate is yet to be seen, the One Laptop Per Child project. The challenges for art are now no longer to make different and better content, but to make different and better networks: more just, more open, more adaptable and more environmentally sustainable.
Posted by Sean Cubitt at 4:28 PM No comments:

the rage to order

The second post reporting on work undertaken in the first months of 2009 is from a chapter for the Urban Screens collection forthcoming from NAi publishers.

While there are certainly reasons to continue developing alternative technologies, there is no need to abandon those we already have to hand. Since the late 19th century, a surprising variety of thinkers from Peirce to Zizek have argued that human beings have a tendency to react to the chaos of perception by creating a world of order: intellectual, mathematical, linguistic, conceptual, symbolic. This tendency can be described as a drive towards order. Drives, however are dangerous things. Unconstrained, hunger and sex can make people mad; and the drive to order is no different. At a personal extreme it becomes obsessive, and at a social extreme fascistic. Like the sex drive, it can twist into its violent opposite and become a rage for formlessness and destruction. But like both sex and hunger, it can also be sublimated. Paolo Virno (2008) suggests, using the case of language, that an instinct that might become destructive can be contained or in some sense healed by the application of a homeopathic principle: a little of the poison to cure the disease. This might well be the function of art: to provide that grain of ordering which cures our instinctive drive of its most terrifying extremism.
Posted by Sean Cubitt at 4:24 PM 1 comment:

It's been a busy semester and will carry on so I thought it would make sense to add some posts snatched from things written over the last three months and currently winding their way through refereeing and editorial. The first is from a chapter for Oliver Grau's forthcoming collection "Gazing Into the 21st century"

Prediction, foreknowledge based on statistical aggregation, the enumeration of the enumerable: these have become the ingrained characteristics of the contemporary screen in all its manifestations.

All, that is, bar one: the oscilloscope screen technology utilised in early experiments in computer graphics by Ivan Sutherland, mentioned briefly in the opening pages of this chapter. Sutherland's vector screen, free from the obligation to scan the raster grid in clock time, remains an available technology still deployed in air-traffic control and scientific instrumentation. Its capacities have been ignored in the development of the Cartesian raster display. Yet the vector display is the natural way to display the vector graphics which increasingly constitute the central platform of object-oriented visualisation. The loss of vector screens in the age of vector graphics, and their replacement with codecs whose central innovation is new tools for making vectors visible on raster displays, suggests both a concrete avenue for 21st century technical innovation, and the kind of lacuna in innovation which may only be typical in situations where there is a diagrammatic or structural interchange, a homological assemblage, operating between key technologies like contemporary screens, and core values and processes of both economic and political life. The oscilloscope allows for the arbitrary. Unlike our common screens which have become attuned to the normative workings of the database economy, the vector screen is an expression of a freedom we have sensed, that we have imagined as potential, and which still lies unrealised in the storeroom of residual media. If technologies are articulations of social formations, then genuine innovation, or turning back to follow the road not taken, may well introduce us to a new way of imagining and realising alternative social formations. Perhaps this cannot be achieved with respect for the poor and for the ecosphere, but we know for a certainty that the road we did take has not benefitted either of them. It is time to set the vector free.