1) is a practice.
The Eternal Wisdom has truth a great crystal to which we might ascend. Science, pop science at least, has it something to be approached asymptotically, better with each generation.
Truth is not a construct but the work of constructing, on one side the increasing elegance of its logic, on the other how persuasively it describes the tohu va bohu of the world. The most fascinating practices do both.

2) as legal category
The oxymoron 'formal agreement' is therefore a contradiction: a dialogue (can dialogue ever be exhausted?) that 'ends' in a formal (and performative) statement (guilty/not guilty). Motive (soft) and occasion (hard), testimony (soft) and evidence (hard) assimilated into a single unambiguous verdict.
Query: can ambiguity ever be true? Are some occurrences truly ambiguous.

3) factish, truthiness, post-truth
2018: truth is not to be disdained, even if it means defending institutions we have always criticised (media, intelligence services, judiciary). Is common sense – which is so easily identifiable with ideology – in crisis, eradicating the common in favour of embattled tribes? Or do a) clichés and truisms b) embodied knowledge, habit, know-how and c) 'truths widely acknowledged' still have currency, as common, as commons.

4) hypothesis, proposition, surmise etcetera.
There are subjunctive modes of truth to place alongside ambiguity, the former a trajectory, the latter a condition, not far removed from confusion and proximates like controversy. (Distinguish an ill-formed question that cannot be answered unambiguously or uncontroversially from a well-formed one that is too difficult or whose answer is too complicated. We expect truth to be simple. Is it?)

Reservations: Mathematical (Badiou) and quantum (Barad) ontologies do not much deal in truth in senses 1,2 and 3: concepts of void, multiplicity, intra-action and topology - of the foam of being/becoming – are not crystalline, though persuasively descriptive.
Response: this (descriptive) ontology clashes with (elegant) administration to produce the historical (persuasion, work) as performance of truth in hypothesis testing, verdicts to be picked over. 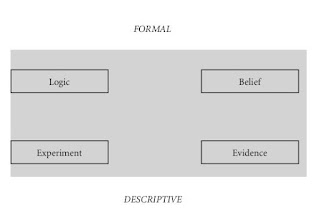 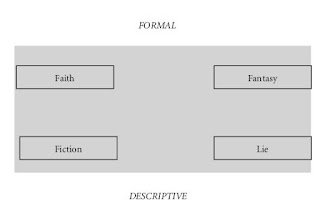 [annotation: 'Belief' here describes phenomena like pensée sauvage, theology, the hidden hand of the market, certain forms of environmentalism: - a systematisable certainty that x is the case which provides the axiom(s) for a cathedral of thinking. 'Evidence' might perhaps better be expressed as 'Testimony']

a) Truth is a practice and therefore requires media through which it can be practiced: instruments for capturing evidence, means of storing and ordering arguments and beliefs, modes of transmission, persuasion, establishing.
b) therefore truth has a history. As a practice, truth therefore has a media history. The first diagram allows for histories of modes of proof and typologies of data, for example.